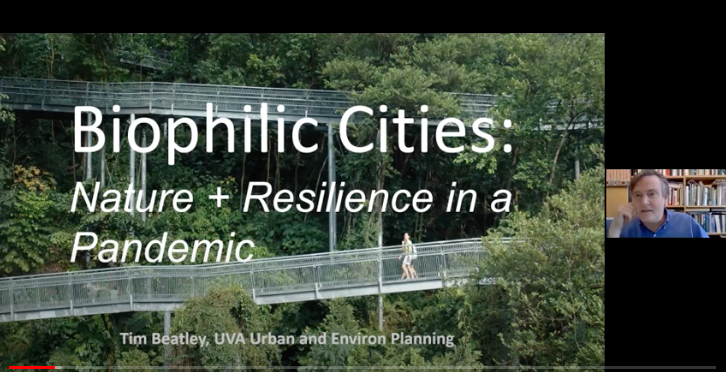 Dr. Tim Beatley of the University of Virginia presents to the speakers series class on Jan. 27, 2021.

The UNC Department of City and Regional Planning was lucky to begin our Natural Hazards Resiliece Speakers Series with a guest lecture from Dr. Timothy Beatley on Jan. 27. Beatley, a professor at the University of Virginia, spoke at length about his research on biophilic cities, the connection between humans and nature and the potential for more “natureful” cities to offer community resilience during the COVID-19 pandemic and other challenging circumstances. His primary argument, what he calls the biophilia thesis, is that nature has a positive impact on human moods, health and ability to be resilient in times of strife. For example, studies have shown that spending even a short time in forests measurably reduces stress hormones and other physical ailments. In order to harness these benefits, according to the professor, humans should work to center the incorporation of nature into city design. 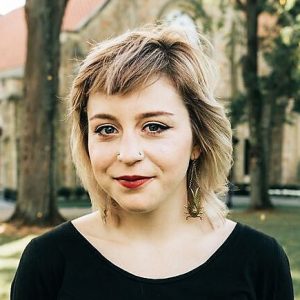 Biophilic cities are not just an academic pipe dream or a concept that exists only in the form of CGI site models. Biophilic City is a designated title held by a network of more than 30 cities around the globe. While Singapore (“the garden city”) is the poster child for nature-savvy design, there is no single blueprint for a biophilic city. Cities simply must adopt a formal resolution to actively plan in a manner that integrates natural habitat. Some cities pursue the biophilic framework by installing living (planted) roofscapes, while others specifically work to improve urban bird habitats. While there are many, many examples of biophilic urban design, I was personally most interested in the multiple potential benefits offered by adaptive flooding landscape design.

Growing up in swampy, coastal North Carolina, I’ve spent much of my life wondering why people build structures in areas that are prone to flooding and the various other hazards that come with living in a place that only exists thanks to the Army Corps of Engineers. More and more, models predict that much of North Carolina will face serious environmental and economic damage related to sea level rise in the coming years, yet we continue to construct new buildings in flood-prone areas. Rather than continuing the fool’s errand that is trying to beat nature at its own game, why not work with it instead? 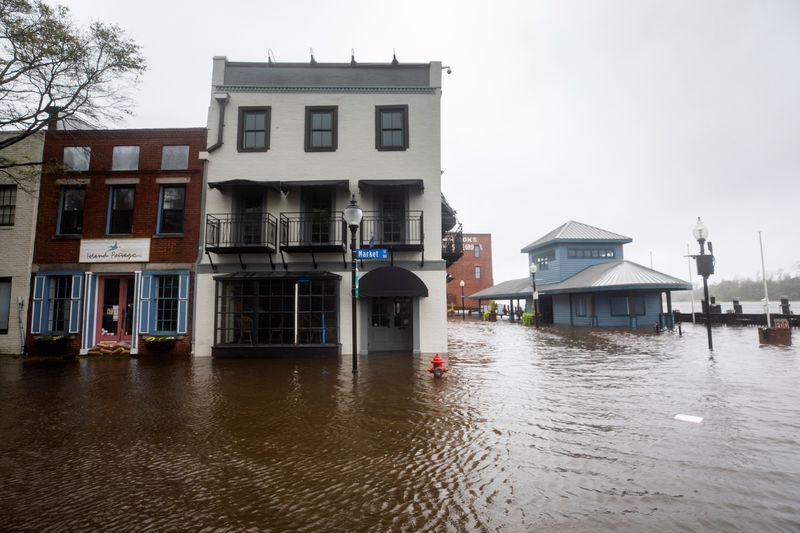 When the Cape Fear River spills its banks, downtown Wilmington goes underwater. Could a riverfront park soak up some of the floodwaters? Credit: EPA-EFE.

Enter multiuse design for flood defense. As Dr. Beatley mentioned during his lecture, the New York City Department of Parks and Recreation recently released a guide for “Design and Planning for Flood Resiliency.” Obviously, there are many differences between New York and New Bern, but as coastal urban areas they will face similar challenges regarding sea level rise. Among New York’s impressive guide are plans to dedicate much of the urban waterfront to resilient multiuse parks.

While these parks are designed to mitigate flood-related damage during worst-case scenario natural events, under normal conditions they operate as a regular park space. This allows humans to experience the many benefits of open natural space such as stress reduction, sunlight, exercise and social gathering. Furthermore, when native plants and other materials appropriate for the ecosystem are utilized, the park can serve as a valuable urban habitat for birds and other wildlife. Whereas non-adaptive land use patterns work against nature, multiuse flood control parks benefit humans, non-human species and the greater city overall by giving the extra water a place to go. 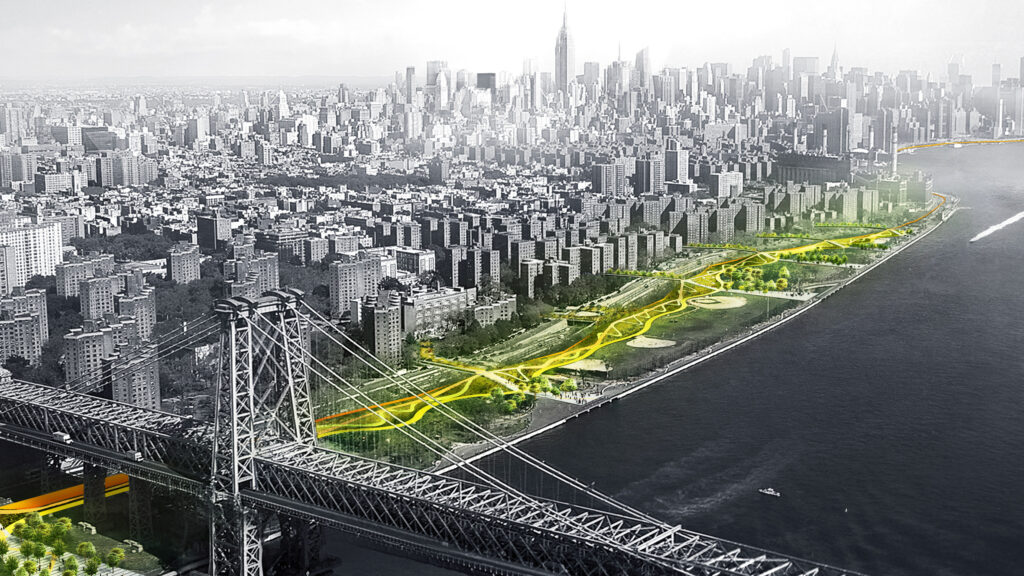 The BIG U, designed by firm BIG, combines hard and soft flood water management strategies to mitigate the impacts of sea level rise on Manhattan. The 16-kilometer park area serves a variety of different human needs based on neighborhood contexts. Credit: Dezeen.com.

Biophilia is not just an interesting concept – it is an imperative for the cities of the 21st century. North Carolina’s coastal and swamp regions will require extensive adaptation and resiliency planning if our urban areas are to survive the intensifying climate crisis. However, to echo Dr. Beatley, the task of building biophilic cities is not just an important measure for surviving a crisis. Instead, biophilia offers planners a new framework for a dramatic paradigm shift where we treat nature as a partner rather than an obstacle that can be engineered away. In accepting humanity’s ecological (and ontological) interdependence with the rest of the planet, we have an incredible opportunity to build cities that are healthier, happier and more resilient than ever.

So-called coastal “North Carolina” rests on land stolen from indigenous tribes. These peoples, including the Tuscarora, Cape Fear, Coree, Pamlico and several other nations, invented biophilic design long before the arrival of European settlers and their descendants continue to practice it today.

Mad Bankson is a queer activist and DCRP master’s student from Wilmington, North Carolina. Bankson holds a bachelor’s degree in geography from Vassar College and continues to pursue interdisciplinary work within their specialization of Land Use and Environmental Planning. In their current research, Bankson seeks to support communities in their struggles for housing justice, environmental equity and abolition.